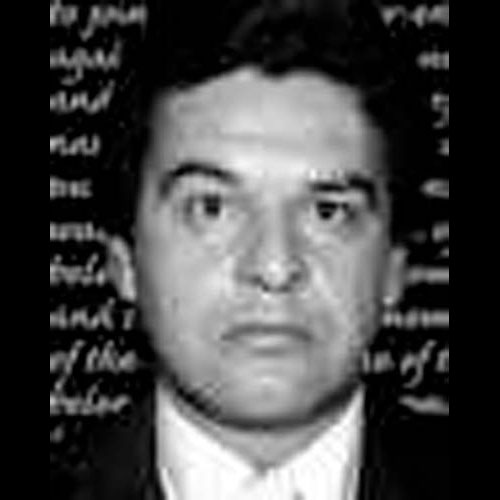 Special Agent Enrique S. Camarena, of the Drug Enforcement Administration’s Guadalajara, Mexico, Resident Office, was kidnapped and tortured by Mexican drug traffickers on February 7, 1985. It is believed that Special Agent Camerena’s death actually occurred on February 9. His body was discovered on March 5, 1985. He was 37 years of age at the time of his death. Special Agent Camarena joined DEA in June 1974 as an Agent with the Calexico, California District Office. He was assigned to the Fresno District Office in September 1977, and transferred to the Guadalajara Resident Office in July 1981. During his 11 years with DEA, he received two Sustained Superior Performance Awards, a Special Achievement Award and, posthumously, the Administrator’s Award of Honor, the highest award granted by DEA. On the afternoon of his disappearance, Special Agent Camarena was en route to meet his wife Geneva for lunch. He was abducted by five assailants as he left the U.S. Consulate, one of whom identified himself as a Mexican law enforcement official. Special Agent Camarena was never seen alive again, and is believed to have been extensively tortured for two days before he died from a crushed skull. Major organized crime figures from Mexico, including Rafael Caro Quintero, Rueben Zuno Arce, Miguel Felix Gallardo, Humberto Alvarez Machain, Mario Verdugo and Ernesto Fonseca Carrillo were arrested for Enrique Camarena’s torture and murder. This event had triggered Operation Leyenda, the largest homicide investigation that DEA had ever undertaken. Prior to joining DEA, Special Agent Camarena served two years in the U.S. Marine Corps. He worked in Calexico as a fireman and then as a police investigator, and was a narcotics investigator for the Imperial County Sheriff Coroner. Special Agent Camarena was survived by his wife, Geneva and three children, Enrique, Daniel and Erik. Special Agent Camarena’s death inspired millions of people around the world to lead drug-free lives. Each October, thousands of schools, communities and state and local drug abuse prevention organizations distribute red ribbons to honor Special Agent Camarena’s memory. The millions of Americans who wear these ribbons demonstrate visibly their commitment to this cause. DEA’s Miami Division hosts a golf tournament each year in memory of Special Agent Camarena. Proceeds from the tournament benefit the DEA Survivors Benefit Fund.